This is the second time I’ve done this lesson.  You can read up on the previous attempt here.

Quick synopsis: There is a local contest to determine how much a large pumpkin weighs, the winner receives a year Family subscription to the YMCA (worth about $800).  This contest concludes on Halloween.

Step 1: Find the dimensions of the pumpkins.

Here is the pictures I gave the Applied Math class: 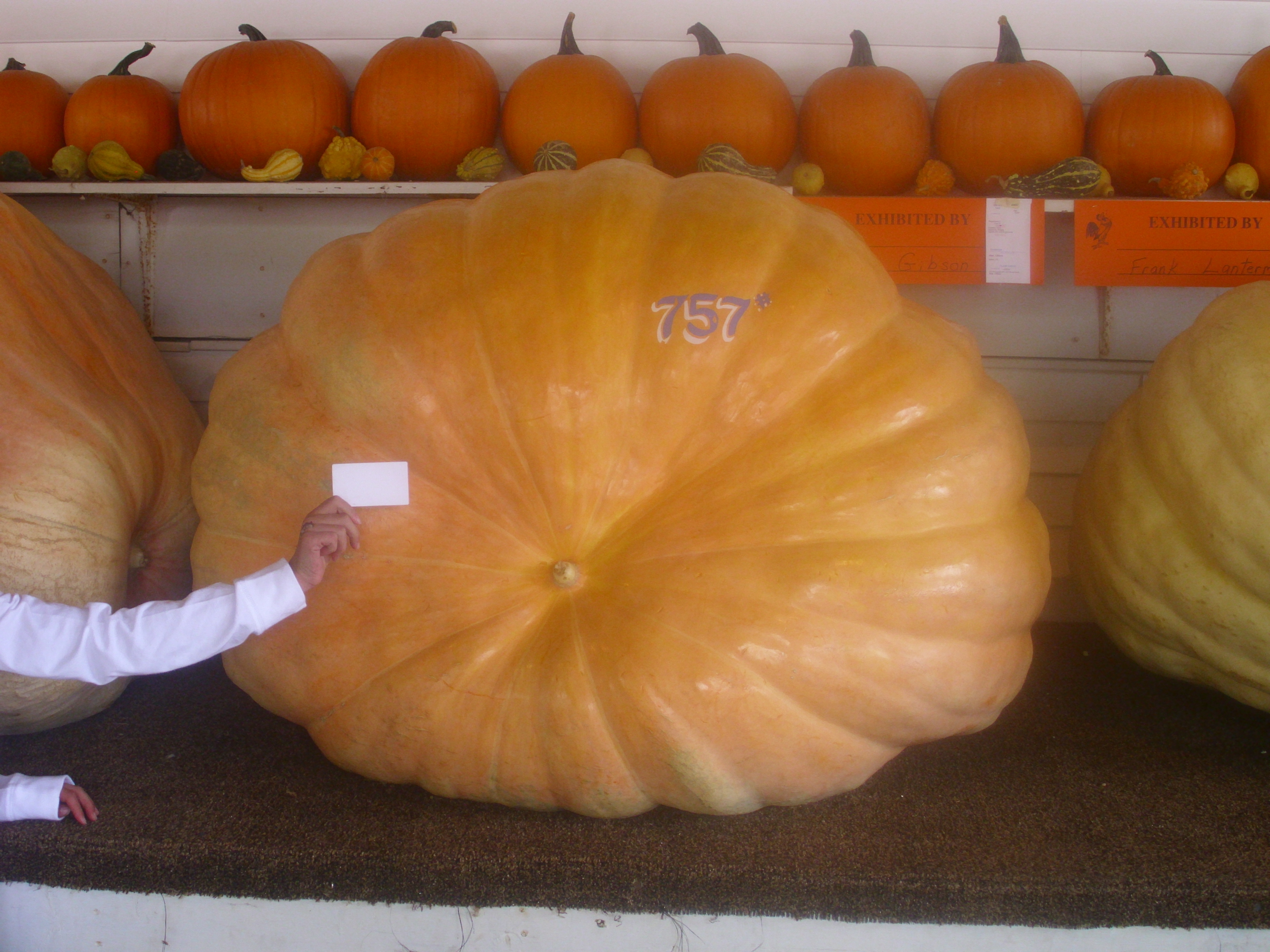 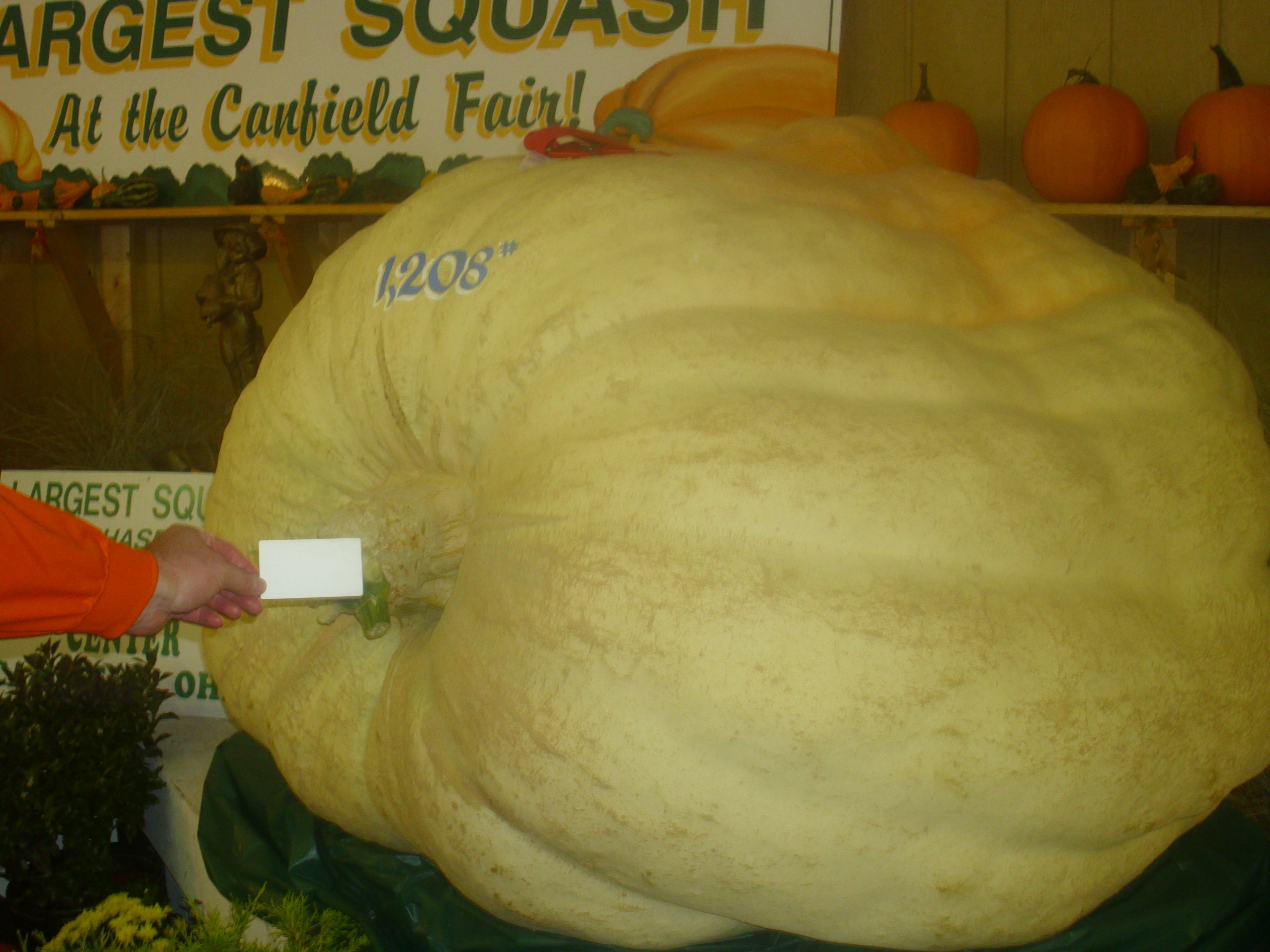 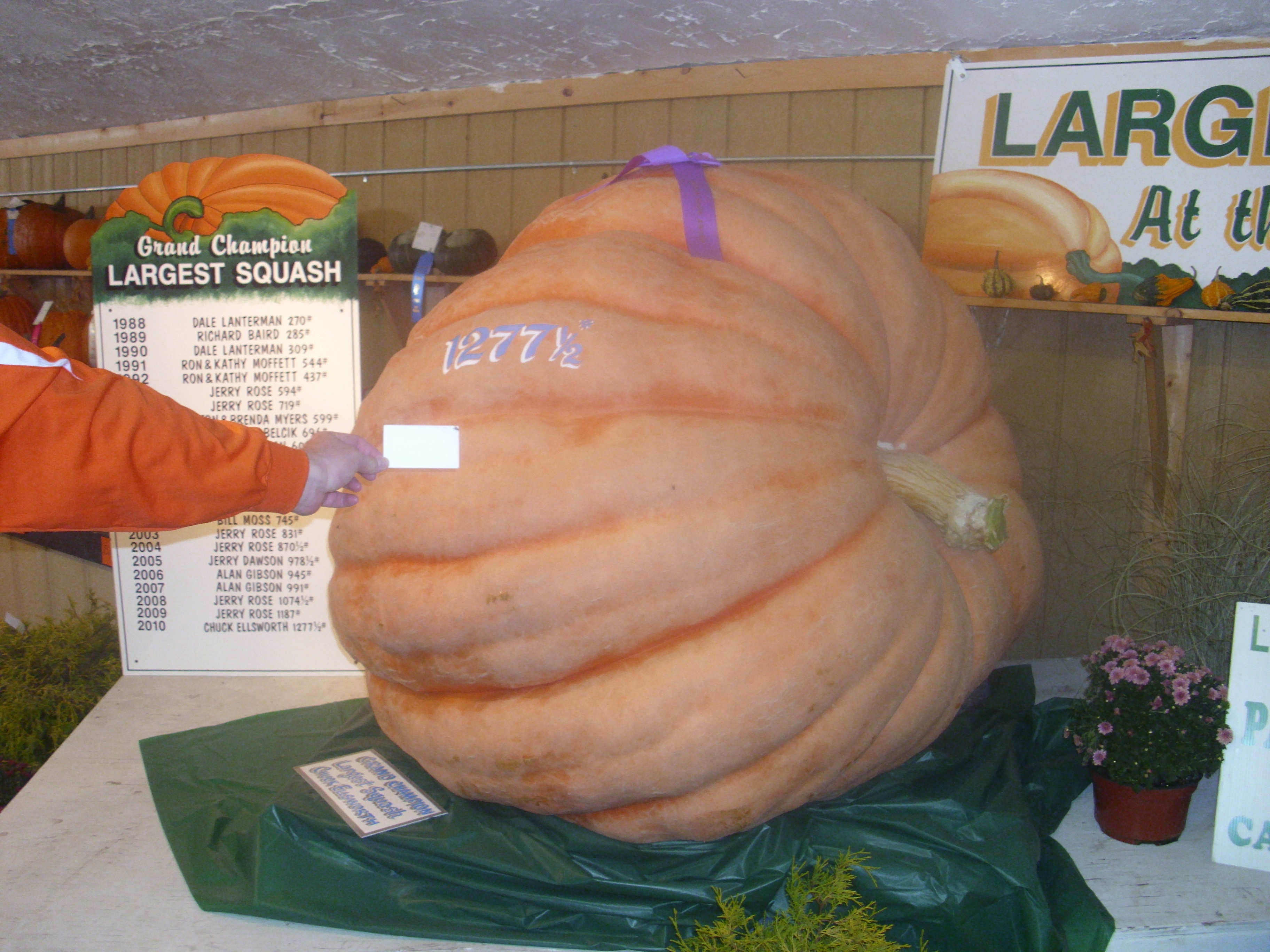 Much thanks to Lisa Henry (@Mrs_LHenry) for the pictures.  I asked; she delivered!

So the class was able to find dimensions of each of the measurable pumpkins using proportions[1] and scale factors based on the business card in the picture.  Next I gave them pictures of the pumpkin that we wanted to find the weight of: 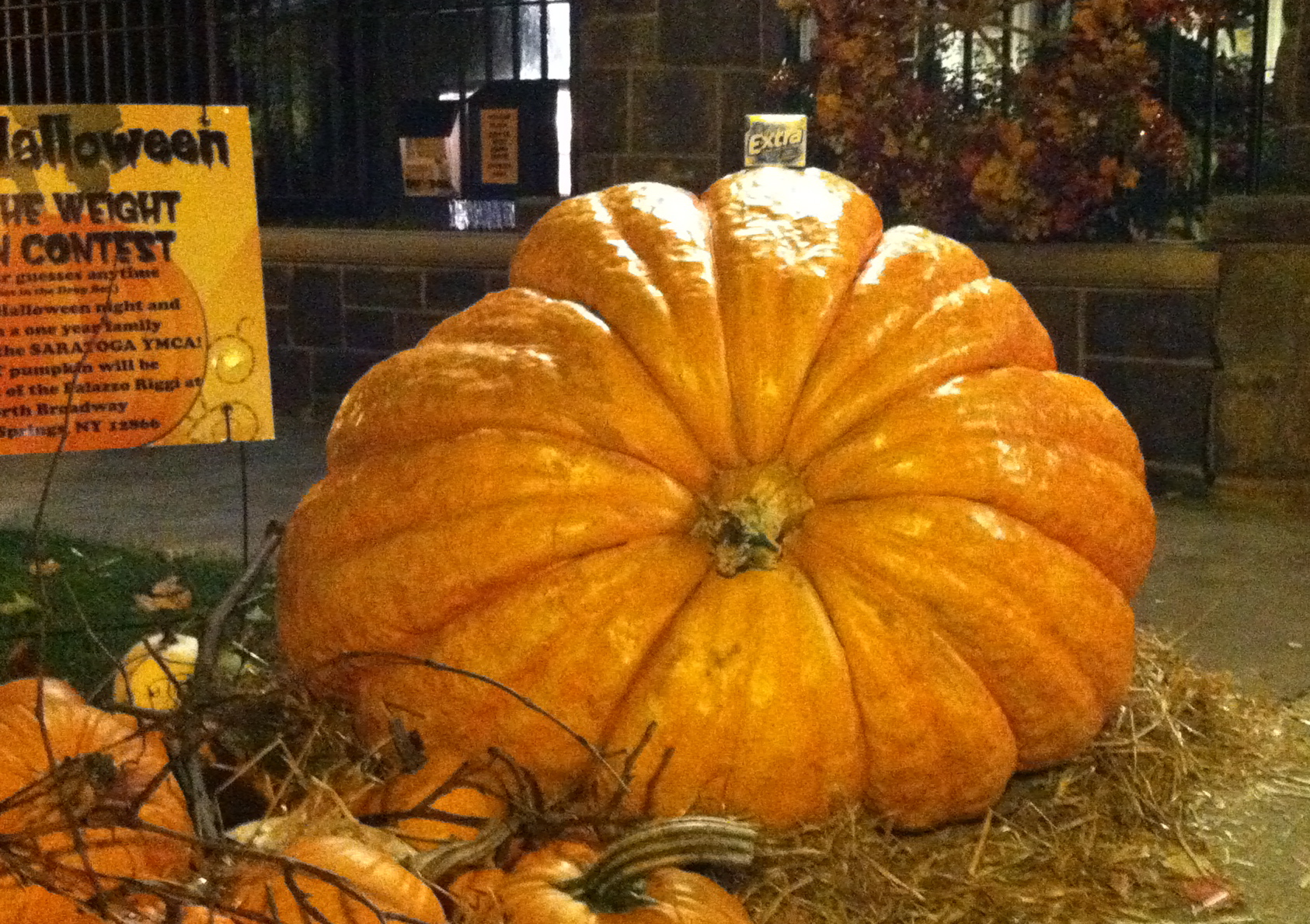 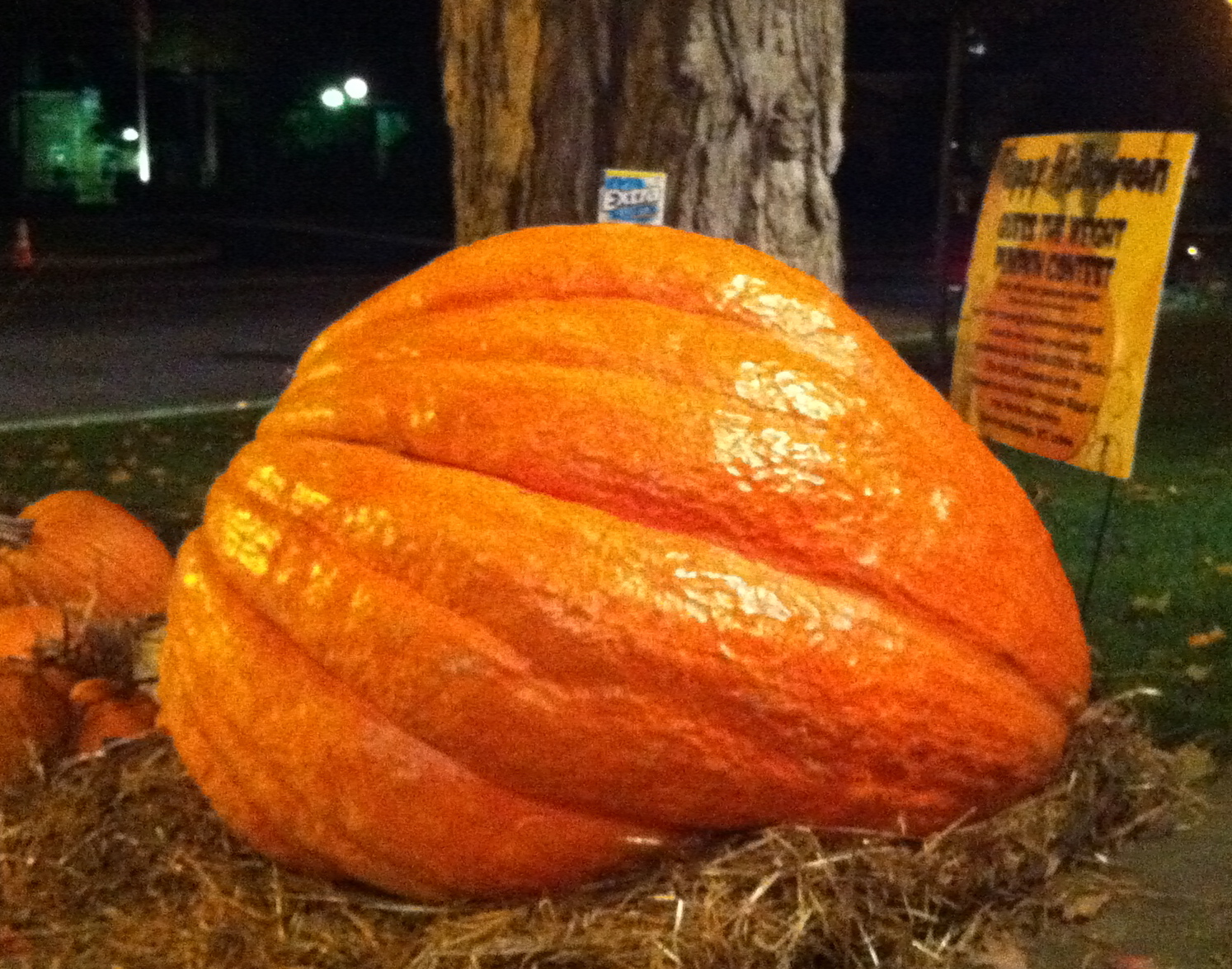 Next the students had to graph a scatter plot of the dimensions to see if there was a corrilation between the dimension and the pumpkin weight.  The three graphs they had to create were: height vs. weight, length vs. weight, and cross-sectional area vs. weight.  It turns out that our data didn’t show any correlation between the length of the pumpkin and its size.  Good (not great) discussions followed, talking about how life doesn’t always work out like you wish it would, and how data doesn’t always fit our hypothesis.

Also it seems like one of the pictures was significantly off when compared to the others.  The pumpkin above with the weight 1208 pounds appears to be much more dense compared to the other two pumpkins.  It was an outlier for our graphs, and this led to some important discussions as well.

Step 3: Put your money where your mouth is

The students all got an entry form to fill out, and they had to put their calculated guess on the whiteboard.  The following are their guesses: 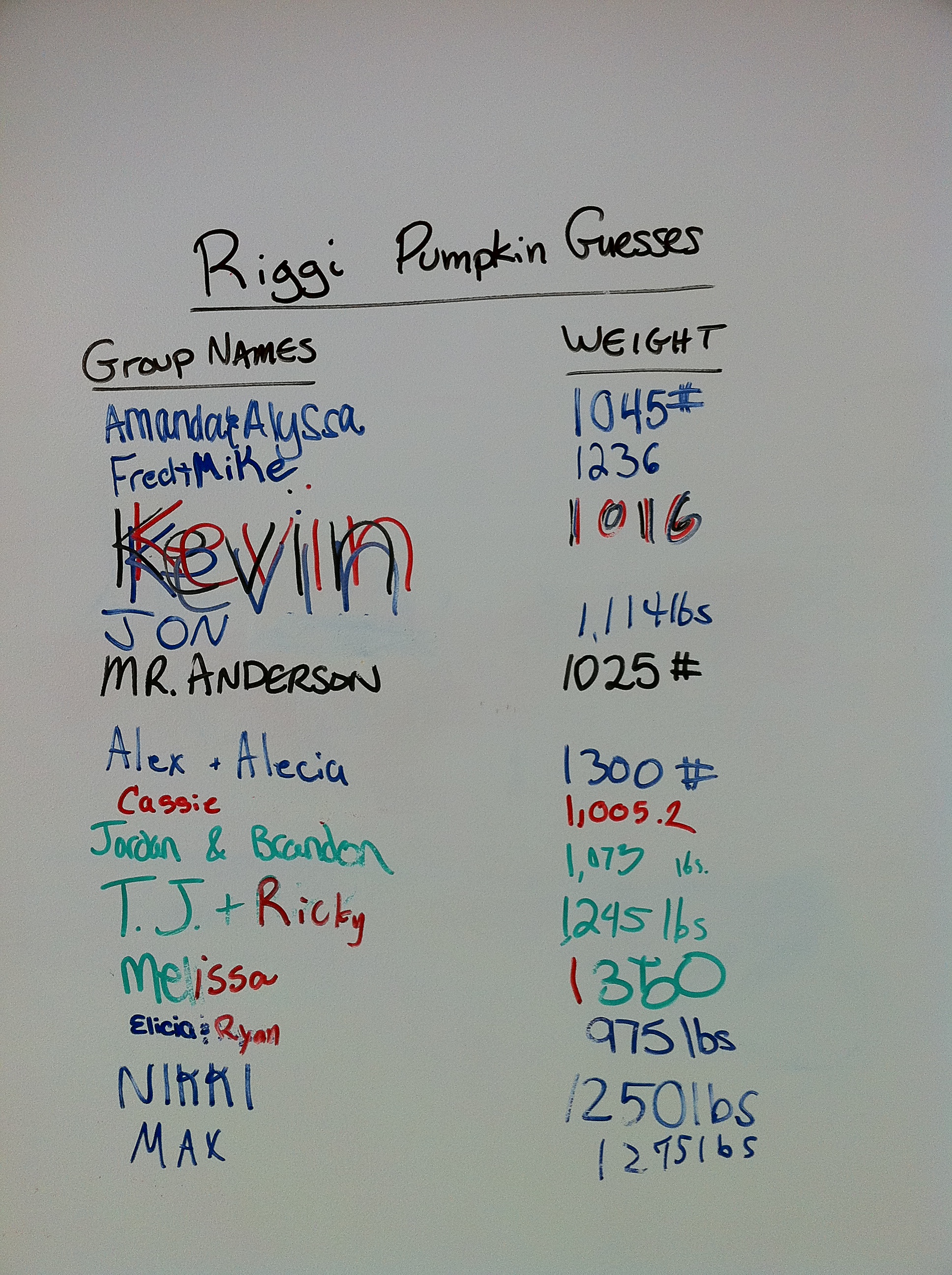 Step 4: And now for the horribly disappointing answer

Ok, so we were waaaaay off.  Nearly by a factor of two.  I think I may know the problem, and it is possibly math related.  I’ll give you some time to think about it.

(Rhode Island is neither a road, nor an island.  Discuss.)

I think the problem lies in difference of how the photos were taken of the pumpkins.  Notice that in the pumpkins that we know the weight of, the business card is in front of the pumpkin, and in my photo of the Riggi pumpkin, the pack of gum is on-top of the pumpkin? 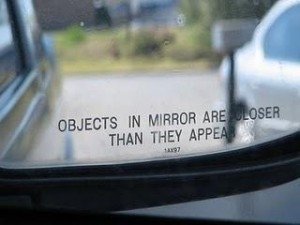 I think that if the students learn one thing in math class, proportions should be it. There is nothing more useful in everyday life then a good proportion.Back to Post

4 Responses to How Big is that Pumpkin?