The grading system in Geometry this year was described to the students with the following description:

The final concept grade will be out of a grade of 8. The best you can do on the first quiz is a 4 out of 8 (50%). Every concept will quizzed at least twice. If the second grade is higher than the previous grade, then you double the new grade. Otherwise you add the two grades together. Here are some examples:

That is how the grading system ran for three quarters. For the fourth quarter, I made one small change: The first assessment of a concept was not graded and just feedback was given. In reality this meant that their grade for an assessment was based solely on one assessment, and this was usually a week behind when we actually worked on that concept in class.
At first they didn’t like the change because I think they were relying on the grade to tell them all the information. But after a week they had gotten used to it and I heard no complains.

Pros To Feedback Only On The First Assessment

Cons To Feedback Only On The First Assessment

Overall I’ve increased the length and breadth of my feedback to the students. After being goaded into writing more feedback, I’ve written more on students quizzes than ever before.

I started the year off by giving a grade and some feedback.
To me it looks like this: 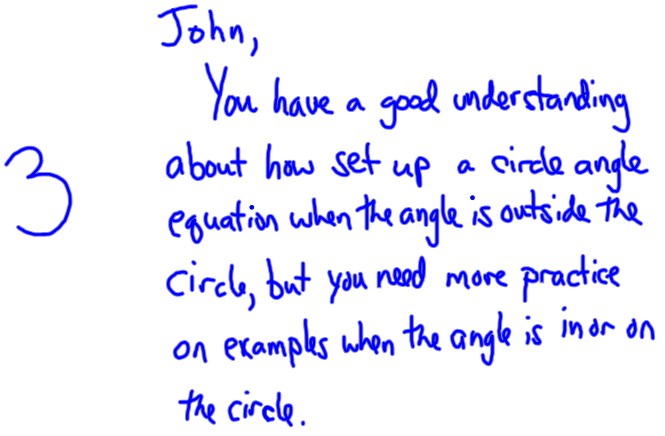 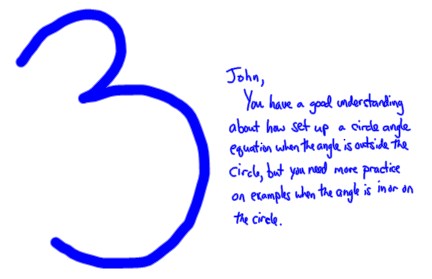 So I’ve come up with the following inequality (nerd!) to describe the situation:

Do you have any feedback? If you do give me feedback with a grade, be careful, I may not read the feedback carefully.

10 Responses to SBG: A Small Tweak and a Feedback Inequality