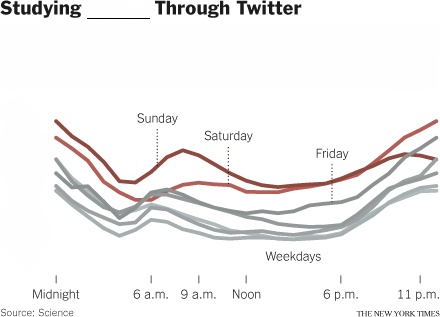 To no one surprise, [removed] was lowest on Monday afternoons and through Tuesday, the beginning of the work week, and rose later in the week, peaking on Saturday and Sunday. The pattern on weekend days was shifted about two hours later — the morning peak closer to 9 a.m. and the evening one past 9 p.m., most likely because people sleep in and stay up later — but the shape of the curve was the same.

What subject were they studying?

This entry was posted in interesting stuff and tagged #anyqs, graph story, graphing. Bookmark the permalink.