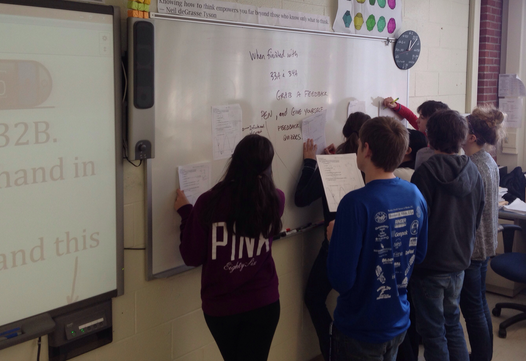 The second time they see a standard it is for a grade, normally a week or two after we’ve taught the topic in class (grade out of 5: 5, 4.5, 4, 3, or 2). The grade goes in the books as is. They get three reassessment opportunities per term (out of 10-15 total standards per term). They see their graded quiz, but they don’t get to keep the graded assessment.
Things I need to get better at for next year:
Providing feedback myself to the student instead of just leaving it up to them. I like they they take responsibility in knowing what they know and don’t know, but I don’t think they are always able to give themselves the directed feedback that a teacher could give. I get a general idea of where the class is by informally going around and looking at quizzes post feedback, but I don’t have the whole picture. This informal feedback has changed the class, sometimes its obvious that they’ve understood a topic and we can move on, other times it’s clear that we need to take a different look at this material before moving on.

5 thoughts on “Feedback On My Feedback System”