It reminded me strongly of the waning moon and linear mod art projects that I’ve been playing with.

For instance, here’s a screenshot from the waning moon (specifically y = 56x) 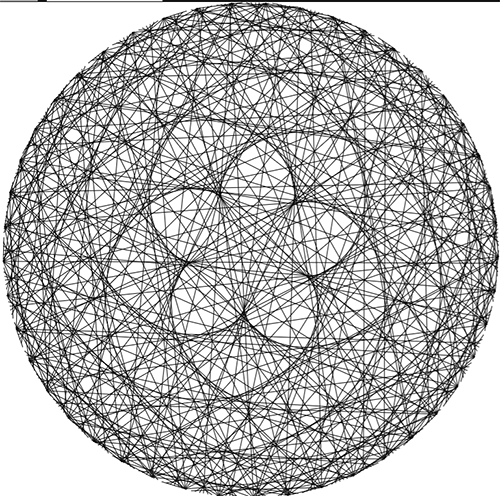 A quick intro: the picture above was made by taking 360 points around a circle, and shifting them by the function (y = 56x), and then graphing a line between the input and output. If the output is greater than 360, then take the remainder after dividing by 360.

And from John Carlos Baez’s blog:

It’s called the pentagram of Venus, because it has 5 ‘lobes’ where Venus makes its closest approach to Earth. At each closest approach, Venus move backwards compared to its usual motion across the sky: this is called retrograde motion.

Actually, what I just said is only approximately true. The Earth orbits the Sun once every

days. Venus orbits the Sun once every

days. So, Venus orbits the Sun in

That’s pretty close! So in 8 Earth years, Venus goes around the Sun almost 13 times. Actually, it goes around 13.004 times.

Hey do you recognize what that ratio is close to?

Anyway, there’s a lot to investigate here. How is the function y = 56x related to these planetary orbits?

3 Responses to Tracking Venus and Earth over 8 years